This building is located on Via Giuseppe Comez, one of the most rapidly transforming streets of the city of Bitonto, is a part of a continuous street elevation. When we started with the project, we knew that we would be limited to designing the rear façade, where the bedrooms are located. Our focus was designing a special elevation that defines the street façade while distinguishing itself from the façades of other buildings.

To break down the flat and two-dimensional layout of the traditional façade layout, we proposed a slightly curvy and asymmetrical wave motion along the solid façade wall. We added depth to the facade by setting back side balconies wall and emphasizing it with a contrast color.

By continuing the movement on the facade in vertical direction along the single balconies, we created a movement through balconies that transform and change perspective as the building rises.

The result was a dynamic formed building, perceived from every angle and with a different perspective. From every step while walking on the street, the building accompanies the observer with continuously changing perspectives as it completes the street panorama with an unorthodox façade design. 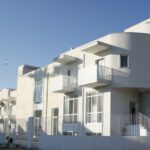 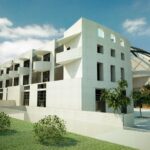